Histology is the study of the microscopic anatomy of cells and tissues. Fisher Scientific offers a wide range of chemicals and reagents, including histology-grade solvents, designed specifically for medical laboratory professionals.

In the fixation stage, a fixative is used to modify tissue by stabilizing the protein, so it is resistant to further changes; thus, fixatives are used to protect tissue from degradation and to maintain the structure of the cells, including sub-cellular components, such as cell organelles (nucleus, endoplasmic reticulum and mitochondria).

In the processing stage, tissues must go through a dehydration process to replace water with the material that will be used for embedding, so the tissue samples adhere to the embedding material. The most common technique is paraffin wax embedding.

Samples are immersed in multiple baths of progressively more concentrated ethanol to remove water from the tissues, followed by a clearing agent, such as xylene, to remove the alcohol and finally hot molten paraffin wax, which replaces the xylene and infiltrates the tissue.

In the sectioning phase, the tissue is sliced into very thin (0.5 - 10 microns; 1000 microns = 1mm) sections using a microtome. These slices, usually thinner than the average cell, are then placed on a glass slide for staining. Frozen tissue embedded in a freezing medium is cut on a microtome in a cryostat.

Routine staining is done to give contrast to the tissue being examined. Hematoxylin and Eosin (H&E) are the most commonly used stains in histology.

There are many other techniques that have been used to selectively stain cells and cellular components.

We offer more than 5,000 Fisher Chemical™ acids, bases, solvents, dry chemicals, solutions and reagents for a variety of applications. We have chemicals for chromatography, elemental analysis or other analytical applications in a variety of settings: industry, production, quality control, research, routine analysis or development. 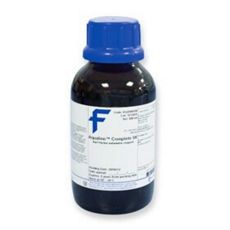