What is Rockwell Hardness Testing?

The Rockwell Hardness Test is generally a non-destructive test performed on samples when it is necessary to determine how hard a material is.  Hugh M. Rockwell (1890–1957) and Stanley P. Rockwell (1886–1940) from Connecticut co-invented the first tester and a patent was granted in 1919. The Rockwell Hardness test is generally considered easier to perform compared to other methods such as Vickers or Brinell.

The Rockwell hardness test consists of indenting the test material with a diamond cone or hardened steel ball indenter. Each time a test is performed two loads are applied to the sample being tested. First, the indenter is forced into the test material under a preliminary minor load and this depth is recorded. With the minor load still applied an additional load is introduced known as the major load which increases the depth of penetration on the sample. The Major load is then removed, and the force on the sample is returned to the minor load. The increase in the depth of penetration that results from applying and removing the major load is used to calculate the Rockwell hardness value.

United pioneered the first automatic data acquisition and reduction system to be used in conjunction with physical testing. United developed the first fully automatic test system able to test several samples in sequence without operator involvement. These breakthroughs have earned the United organization an enviable reputation as the “Pioneers in Tensile Data Acquisition.” 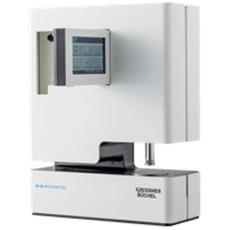 [hardness tester, strength tester, hardness testing instrument]
You are now leaving our website. Please click "proceed" or "cancel" if you wish to remain on this website.
Proceed Cancel